Run with the Bulls

“The history of bulls is linked to that of Spain, it is impossible to understand one without understanding the other.” -José Ortega y Gasset (Spanish Philosopher) DAY 1- MÁLAGA AND RONDA Arrive at Pablo Picasso Airport and meet your driver […]
8 days
All Months

“The history of bulls is linked to that of Spain, it is impossible to understand one without understanding the other.”
-José Ortega y Gasset (Spanish Philosopher)

Arrive at Pablo Picasso Airport and meet your driver as you leave customs. Enjoy the scenery as you ascend into Ronda’s Sierra de la Nieves Natural Park. The first stop on our tour is Reservatauro, a wild bull and Andalusian horse ranch. As you tour the farm, learn how bulls are selected and what qualities are most valued. Walk out into the fields among the calves and colts roaming freely. Finish the visit at the small bullring where you’ll get to try your hand at the cape and learn the basic passes. Lunch is at a nearby family-run winery. Enjoy hearty, mountain paella accompanied by regional vintages. Our driver will take you to your hotel in Ronda to rest before your afternoon tour. Meet your guide in the lobby and go inside the oldest bullring in Spain to step into the matador’s shoes. Later cross the New Bridge spanning a plunging gorge that separates Ronda’s New and Old Quarters. Once across the bridge, your guide will continue the tour down cobblestone streets into the Collegiate Church and Don Bosco’s Medieval Palace.

Meet your driver in the hotel lobby to drive to the nearby white village called Medina-Sidonia. This area is famous for its horse and bull ranches. Today we’ll visit the Alvaro Domecq ranch for a full Spanish rodeo exhibition. Begin with a stroll through the open fields of the ranch to the ring. The rodeo is planned to show you Spanish ranch-hand work with bulls, cows, caves, mares and colts, as well as equestrian art. After the show we’ll head to Cádiz, for an afternoon on the shore. 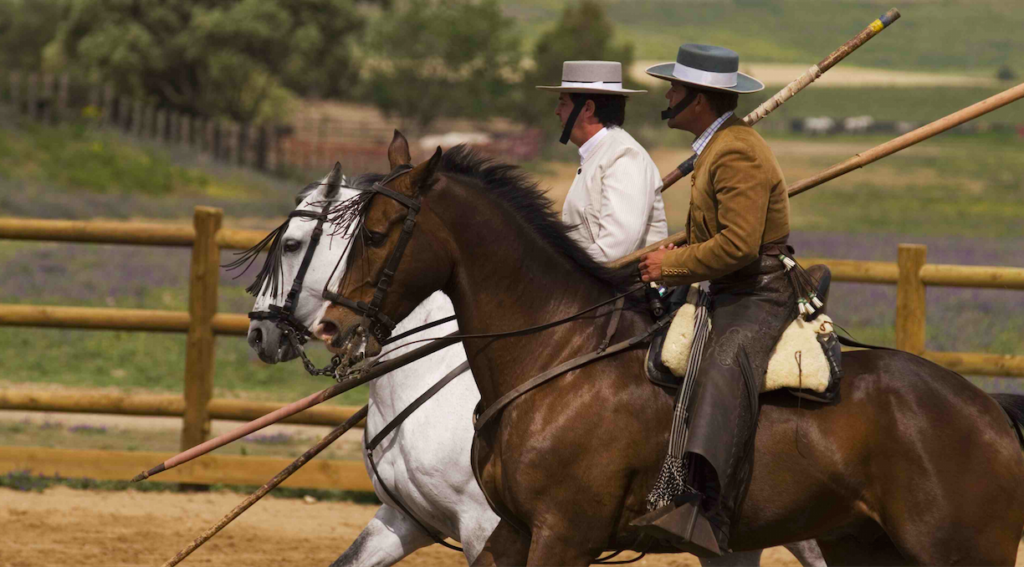 Meet your driver in the hotel lobby for the short drive along the Guadalquivir River to Sevilla. Your guide will meet you after you check in for a walking tour. Begin at the bull ring Museum for one of the most complete Tauromachia collections in Spain. Later follow the city walls past the Murillo Gardens and into Barrio Santa Cruz (Jewish Quarters). See the Alcázar fortress, the Cathedral and the Giralda prayer tower. Your tour will end at the Tower of Gold on the river for a slow cruise on an electric boat. Meet your driver in the hotel lobby for the transfer to Santa Justa train station. Leave Andalucía behind today and ride north on the high-speed AVE, following the traditional cattle herding routes. In Atocha station, we’ll have a driver waiting to take you to Toledo. Just outside the city, we’ll make a stop at Osborne winery – known for its bull logo. Tour the vineyards on a small train, enter the cellars and smell the wine distilling. Finish the visit with a tasting of several varieties combined with a light tapas lunch. Later in the day, meet your guide at the city gates of Toledo for a tour of the Old Town. Visit the Gothic cathedral and nearby San Juan de los Reyes Convent. You’ll also get to see the famous painting by El Greco, “The Burial of Count Orgaz.” Along the way, your guide will tell you the story of Toledo’s 3 religions and people groups that lived in harmony during a time when the rest of the country was at war. End the tour at Sta. María la Blanca Synagogue. Return to Madrid in the early evening and check in at your hotel. Meet your guide at Plaza de Oriente, on the steps of the Royal Theater, the center of 15th century Madrid. This walking tour will lead you through streets and squares belonging to the times of the Hapsburgs royalty. Pass the Royal Palace, Royal Theater and Opera. Your guide will tell you the legends and history of the commoners and nobility during the Spanish Renaissance. A few other stops along the way are the Tower of Lujan, San Miguel Market, and Plaza Mayor where bullfights were once held. 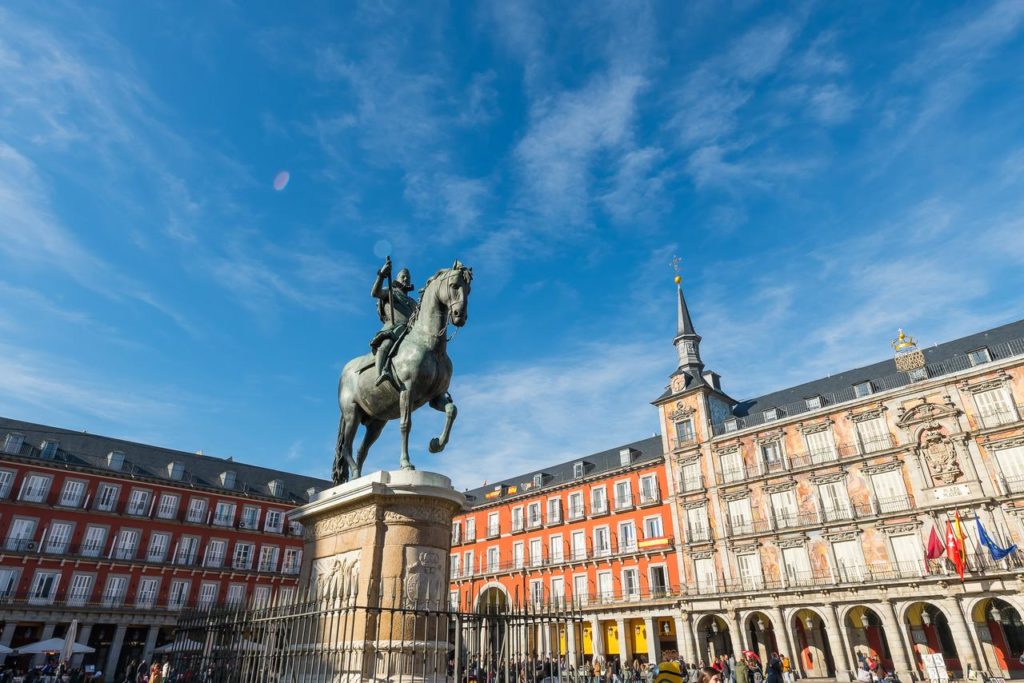 Meet your driver for the ride north through Spanish plains to Pamplona. Check in at your hotel and take the afternoon on your own. You may want to visit some of Ernest Hemingway’s favorite bars. Every time he could, he would attend San Fermines. 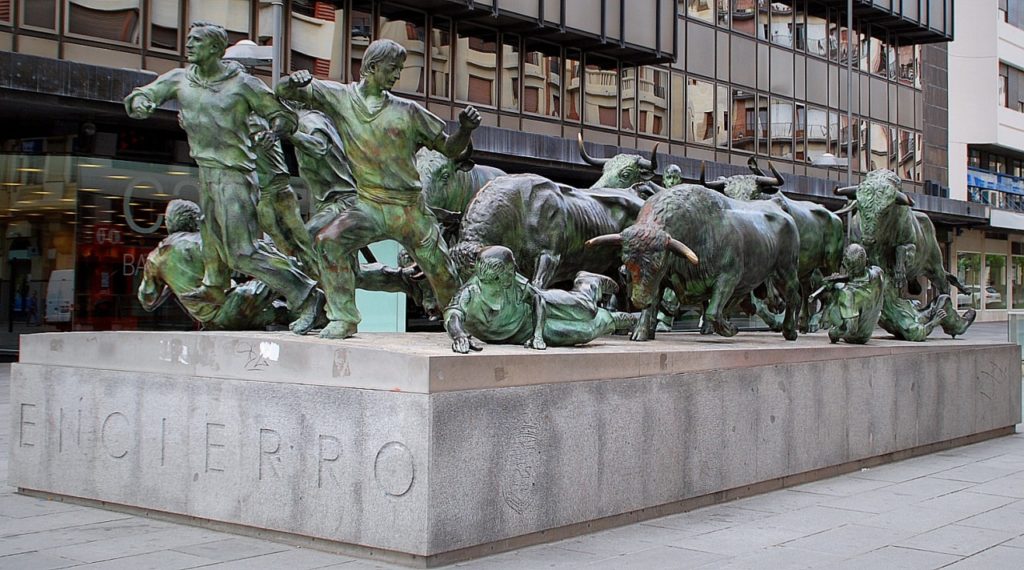 If you’re in Pamplona during the San Fermin Festivals, your day will begin with breakfast on a balcony overlooking the actual running of the bulls. Your guide will explain the significance of the running as well as the clothing used by the runners and each type of bull thundering under the balcony. On other dates, meet your guide and driver in the hotel lobby. We’ll begin the tour with a panoramic drive around the city, passing Taconera Park, the Citadel and Yamaguchi Park before stopping in the historic Quarter of Pamplona. Listen to the tale of this city’s key importance as a stop on the Camino de Santiago pilgrimage route. See the inside of San Fermin Chapel, the running of the bulls’ patron saint. Finish the day with a walk in the bulls’ footsteps, following their yearly run through Pamplona. Meet your driver for the ride to Madrid or Barcelona airport. 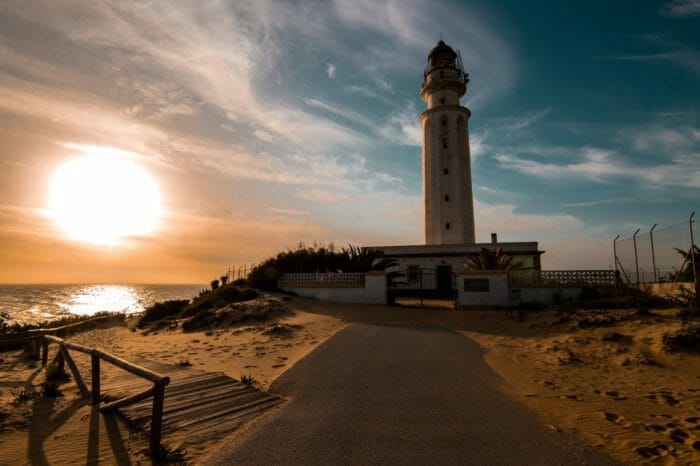 Known for its long, white beaches, natural parks and intense sailing history, the Costa de la Luz situated on the Atlantic lives up to its name with brilliant, sunny days most of the year.  Our first visit will be Bolonia, […] 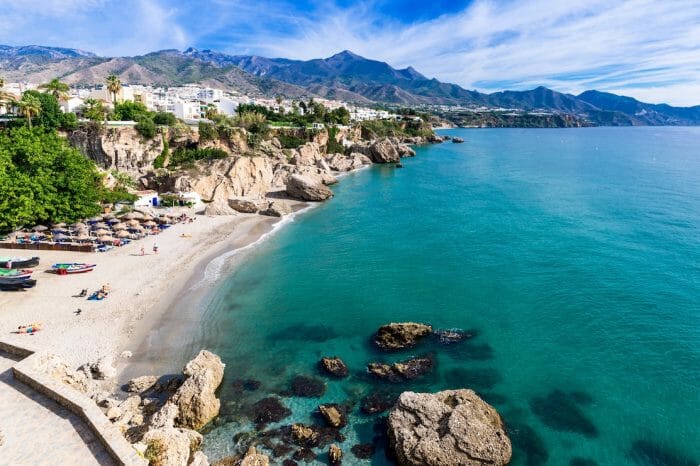 Take a Nerja day trip! Leave the Costa del Sol behind for a day and travel to its lesser known sister – Costa Tropical.  Along the drive, you’ll notice plenty of tropical fruits growing in terraced farms that give the […] Come with South Olé to discover a small corner of Andalucia where traditional village life goes on as it has for thousands of years in the White Villages of Cádiz. We’ll drive up the windy mountain roads through protected forests […]

Run with the Bulls
Manage Cookie Consent
To provide the best experiences, we use technologies like cookies to store and/or access device information. Consenting to these technologies will allow us to process data such as browsing behavior or unique IDs on this site. Not consenting or withdrawing consent, may adversely affect certain features and functions.
Manage options Manage services Manage vendors Read more about these purposes
View preferences
{title} {title} {title}