Imperial Morocco Tour Day 1: Casablanca – Fez (4-hour drive). Our private Imperial Morocco tour starts off with Casablanca (we can also start the tour in Marrakech or Rabat, to suit your flights) which, despite the legend, does not hold […]
6 days
All Months

Our private Imperial Morocco tour starts off with Casablanca (we can also start the tour in Marrakech or Rabat, to suit your flights) which, despite the legend, does not hold much in the way of monuments. That is mainly the reason why the former king decided to give the city a landmark- the second largest mosque in the world. The last few years of its completion, 1400 craftsmen worked by day and 1000 by night. The marble, cedar wood and granite all come from Morocco. The glass chandeliers and white granite columns were brought from Murano, Italy.
Next, our itinerary takes us to Fez for the night. 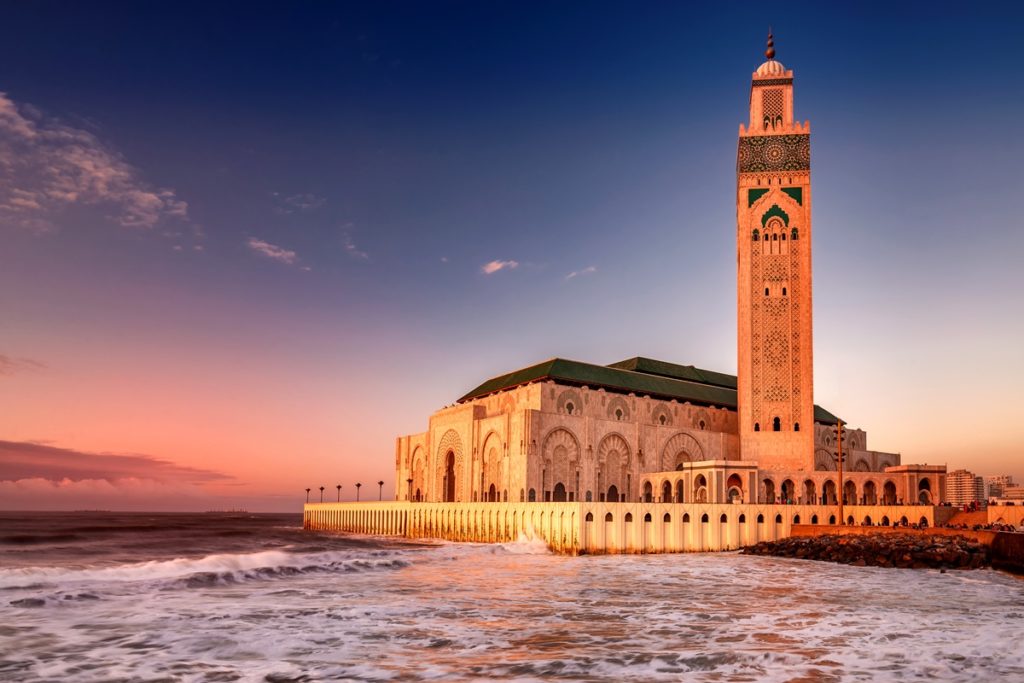 With the first light of dawn, you realize you have travelled in time back to Imperial Morocco. Four centuries? Five? If it weren’t for the satellite dishes adorning every roof, it could be more. Perhaps as much as the Kayraouine University and mosque, now 12 centuries old. The heyday of the caravan trade coming from Timbuktu is long resolute.

There are thousands of derbs, streets so narrow you could whisper in your neighbor’s ear. Your private English-speaking guide will collect you from the Riad just after breakfast and try to make some sense out of the apparently chaotic old town. There are numerous Islamic schools, among which the most ornate are perhaps Bou Inania and El Attarine. They will wow you with their intricate stucco and cedar engravings. Out in the streets again, you will most likely smell the tanneries before you see them… Dozens of workers toil over open vats, dipping skins in to treat them before hand-dyeing them in bright yellow, red and white, stomping them under the hot sun to distribute the pigment.

The guided tour of Fez takes us to Nejjarine Square you can catch your breath enjoying a mint tea on the roof terrace of Nejjarine Foundouk. This 18th-century caravanserai, turned woodwork museum after six years of painstaking renovation.  Just when the walls seem to cave in on you, a little square comes up and suddenly all menace
disappears. The secrets to be found around every corner draw you into the long-forgotten world of the travels of Ibn Battuta and Leo Africanus. 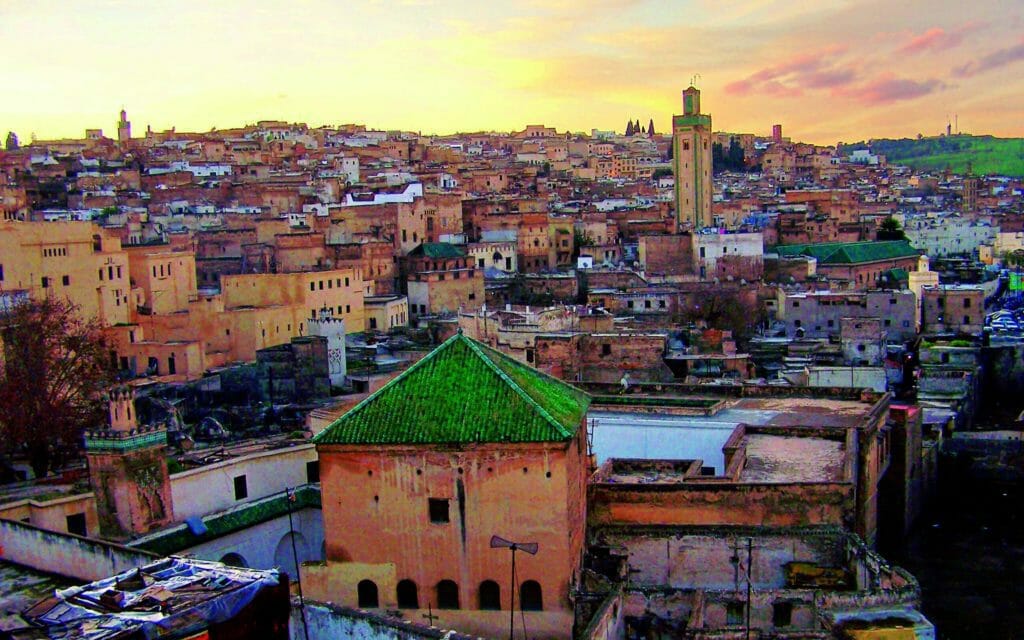 Early in the morning departure at 7.30 am from Fes heading to the Middle Atlas Mountains. The wilderness you cross is incredibly diverse and can vary from rocky, sun baked plains, to cedar – clad mountains to deep canyons. In the hills of Azrou you may spot a troop of Barbary Apes.

Then we slowly descend into the scenic Ziz valley passing palm groves and green oasis. Yet, again the scenery will be changing into the sandy plains and approaching Merzouga we will see the first sand dunes from the road. The great “sand sea” of Merzouga, a beautiful area of fine, apricot – colored sand that stretches as far as the eye can see.

Here we change our car for camels and head into the desert during sunset for about 45 minutes. As evening falls we retreat to the comforts and luxury of our desert camp where we will be greeted with mint tea and fresh dates or nuts. The camp is set in a beautiful spot between sand dunes. It gives the impression of being alone in the vast African desert while enjoying the comforts of a nomad king. We will enjoy a delicious dinner followed by campfire time beneath the starry African sky. Nothing compares to the millions of stars, silence and peacefulness of the
Sahara. We sleep in luxury canvas tents feeling like we walk into one of the stories from the Arabian nights.

Leaving the desert behind we’ll head to the volcanic mountains of Sarhro, dramatic rock formation and gorges of superb views. This area is well known for fossils, mainly ammonites, which are plentiful in the mountains. Reaching the city of Nekob, we start seeing the first palm trees of the Draa Valley. The valley floor is a verdant patchwork of fruit orchards, vegetables, rose farms and of course date palm trees of 18 different varieties. Then we pass the city of Agdz and arrive to Ouarzazate.

Here we make a stop to view the famous Ksar of Ait BenHaddou, an important city to Imperial Morocco. From here we set onto the famous pass of Tizi and Tichka taking us across the High Atlas Mountains on a dramatic drive to Marrakech. Expected arrival to Marrakech around 6pm.

Where Fez is the bashful scholar, the ‘red city’ is the exuberant dancer. More than its opulent night life and luxurious palaces, the design boutiques or the French restaurants, it’s something in the air. The light of the south as some may call it, a certain feeling that nothing can go wrong, a certain je ne sais quoi… A good point to start is perhaps Maison de La Photographie, located in one of the most authentic districts of Marrakech. The photos on display document life in Morocco from late 1800’s all the way to the 1950’s. The roof terrace offers 360 degrees views over the Medina and is the perfect spot for a mint tea and postcard- photo shoots.

Crossing the souks, you may want to spoil yourself with some shopping. Miles of Ali Baba closet size caves where everything glitters will lure you in. Marrakech has the finesse of craft met in Fez but also this design born from the crossing of local tradition with modern design that has made it a mecca for the intrepid global shopper. If it is too early in the day for shopping, you can also admire the dyeing of the wool or the looming of a Berber carpet on site. Past Place des Epices and its shops stuffed with turtles, colorful spices and witchcraft accessories, we make our way into the Kasbah.

Enter the gardens of 19th century Bahia Palace, an epitome of Islamic art of the era and residence of the grand vizier. Uncovered by chance in 1917, the nearby Saadi Tombs hold the remains of the sultans responsible for the last golden age of the city, the 16th and 17th century. The Carrara marble stands witness to the wealth of the dynasty and so does the nearby El Badi palace, albeit only a ruin nowadays. The palace was never completed. The next sultan dismantled the marble, ivory, precious wood and used it all to build his royal palace in Meknes.

As the sun sets, the fumes start rising on the nearby Jemaa El Fna square. Musicians, acrobats, snake charmers, witch doctors and food stalls all come alive. This is the city at its most essential. It is a place where people mingle, perform and people-watch. It’s half-way between a tableau vivant and a circus show. Try to catch one of the story tellers in action, a tradition perpetuated for centuries and likely to disappear soon. A different way to discover Marrakech is by a cooking class. Take a tour of the medina to discover the various ingredients that make up the staple of Moroccan cuisine. This includes preserved vegetables, smmen butter, farnatchi,  herbalist, souika market, mechoui ovens and more. Should time allow for it, spend the morning visiting some of the gardens that made the ‘red city famous’. The Almohad dynasty of 12th century built most of them. Agdal gardens, south of the city was where the waters from the Atlas Mountains were converged by ingenious Arab engineers. They also created Menara gardens with its ornate pavilion overlooking the waters. This is a favorite of marrakchi families for picnic on Sundays. One other
garden belonged to a painter who had fallen in love with Marrakech in the 1920’s and decided to create his own version of paradise on earth. Majorelle Gardens were subsequently acquired by Yves Saint Laurent and then made available to the public. They are best visited early in the morning before they become overcrowded.

Or perhaps you fancy a Moroccan hammam in one of the dozens well- kept public baths scattered around the Medina. If you still have the energy, the village of Imlil offers tremendous trekking opportunities for a few hours.

Depending on your flight out, the driver will drop you off at the airport two hours before your flight. If you are flying out of Casablanca, the route takes 2 hours and a half from Marrakech.

Imperial Morocco Tour
Manage Cookie Consent
To provide the best experiences, we use technologies like cookies to store and/or access device information. Consenting to these technologies will allow us to process data such as browsing behavior or unique IDs on this site. Not consenting or withdrawing consent, may adversely affect certain features and functions.
Manage options Manage services Manage vendors Read more about these purposes
View preferences
{title} {title} {title}